Since his Illmatic debut in 1994, hip hop heavyweight Nas has long been considered one of the most influential and talented MCs to ever hold a mic. The Queens, NY native has dodged the unpredictable and ephemeral nature of the rap industry, consistently releasing critically acclaimed projects that become more than just hip hop records, but defining moments in music history. Racking up 11 albums in the Billboard Top 10, 6 debuting at #1, 13 Grammy nominations, 8 consecutive platinum and multi-platinum albums, and over 30 millions records sold worldwide, Nas’ catalogue speaks for itself. In summer of 2018, Nas released the 4th of 5 Kanye West-produced projects, NASIR to critical acclaim. Most recently, the highly-anticipated The Lost Tapes II album was released including contributions from Swizz Beatz, RZA, Kanye West, No I.D., Pete Rock, The Alchemist amongst more. On July 19, 2019 - Nas released The Lost Tapes 2, followed by the recent Hit-Boy produced album King's Disease featuring Big Sean, Anderson .Paak, A$AP Ferg, Lil Durk, Don Toliver, The Firm (Foxy Brown, AZ, Cormega), Charlie Wilson, and Fivio Foreign.

Nas has been engaging in far more than music in the 6 years following his last full-length solo record Life Is Good (2012). His venture capital firm Queensbridge Venture Partners has invested in a number of notable companies including Casper, Lyft and Genius; he has invested in and helped grow media company Mass Appeal into a multi-faceted conglomerate with branches in production, agency and music; he has diversified his business portfolio by founding restaurant Sweet Chick and sneaker boutique 12AM:RUN, he has heavily supported UNICEF and the East African region known as the Horn of Africa. These efforts have been recognized by Harvard, the Ivy League college establishing the Nasir Jones Hip-Hop Fellowship in 2013 and awarding Nas the W.E.B. DuBois Medal in 2015. Nas has ascended rap and become more than the music he continues to create. 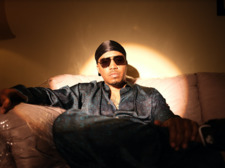