As an accomplished actor and producer, Tika Sumpter is quickly establishing herself as one of Hollywood’s most sought-after multihyphenates. Tika stars on top-rated ABC comedy series MIXED-ISH, the heartfelt spinoff of BLACK-ISH, where she plays “Alicia Johnson” opposite Mark-Paul Gosselaar and Gary Cole. Tika’s latest endeavor is Sugaberry , a lifestyle brand for moms of color she co-founded with Thai Randolph, after being frustrated with the lack of resources available for brown mamas during her own pregnancy.

Launched March 23, 2020, Sugaberry caters, cultivates and celebrates all aspects of the brown mom experience through a curated mix of editorial content, original audio and video programming, interviews, newsletters, live event series, thoughtful product recommendations and more. Sugaberry also features original reporting, expert parenting advice, and unfiltered stories from a collection of celebrity guest contributors and influencer ambassadors. Tika and Thai also launched The Suga Podcast on Stitcher. The podcast is a weekly conversation series exploring motherhood from the perspective of notable brown moms.
Tika’s recent acting credits include: Paramount Pictures’ SONIC THE HEDGEHOG and OWN’s highest-rated series, THE HAVES AND HAVE NOTS, directed and produced by Tyler Perry. In 2016, Sumpter received critical praise for her “spot-on performance” (Todd McCarthy, The Hollywood Reporter) as a young Michelle Obama in Miramax’s feature film SOUTHSIDE WITH YOU, which Sumpter co-produced with John Legend. The film, inspired by Barack and Michelle Obama's first summer date, premiered at the Sundance Film Festival that year to a standing ovation and went on to receive rave reviews.
Tika resides in Los Angeles with her fiance, Nick, and their three year old daughter, Ella. 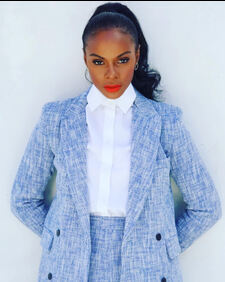