Kristen Bell most recently starred in the NBC series “The Good Place,” opposite Ted Danson. She also reprised her role as ‘Anna’ in “Frozen 2,” which with 1.4 billion thus far, has surpassed the $1.2 billion “Frozen” earned worldwide and taken over the top position as the highest grossing animated film of all time. Additionally, Bell is executive producing and appearing in a second season of “Encore,” which you can find on Disney’s streaming platform Disney+.
In 2016, Bell was seen as ‘Jeannie Van Der Hooven’ in the Showtime series “House of Lies” opposite Don Cheadle, which wrapped its fifth and final season. In 2014, Bell reprised her beloved title role in Warner Brothers’ film “Veronica Mars," which raised $2 million on Kickstarter in less than eleven hours and broke the record at the time for the fastest project to reach $1 million and $2 million. She also brought back the role for a revival of the series on Hulu. She appeared in a guest-starring arc on NBC’s hit series “Parks & Recreation” and played the lead role in the independent film “The Lifeguard,” which premiered at the 2013 Sundance Film Festival.
Bell also recently starred in “A Bad Moms Christmas,” alongside Mila Kunis and Kathryn Hahn. The film is a sequel to 2016’s “Bad Moms,” the first STX film to gross over $100m domestically. Her other film credits include: “PANDAS,” “Olaf’s Frozen Adventure,” “Teen Titans Go! to the Movies,” “Like Father,” “CHIPs,” “How To Be A Latin Lover,” “The Lifeguard,” “The Boss,” "Hit & Run," “Movie 43,” “Some Girls,” “Writers,” “Big Miracle,” “You Again,” “Burlesque,” “When in Rome,” “Couples Retreat,” “Forgetting Sarah Marshall,” “Pulse,” “Serious Moonlight” and David Mamet’s “Spartan.” Her television credits include: “Veronica Mars,” “Parks & Recreation,” “Unsupervised,” “Deadwood,” “Heroes” and “Party Down.”
Her Broadway credits include “The Adventures of Tom Sawyer” and “The Crucible,” opposite Liam Neeson and Laura Linney. Her Off-Broadway credits include “Reefer Madness” and “A Little Night Music.” 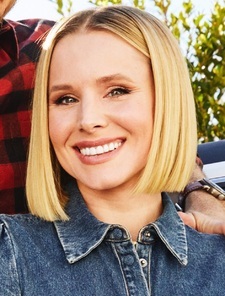